Roswell Reports: The Official Government Explanations of What Really Happened at Roswell 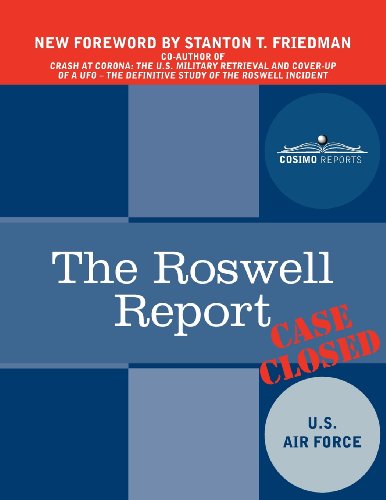 Cosimo has recently published two new reports on Roswell, Fact versus Fiction in the New Mexico Desert and Case Closed. These fascinating and lengthy accounts are the official United States government response to all the hype and hoopla that surrounded the historic events at Roswell, New Mexico, which ufologists claim was the landing site for alien aircraft that the government subsequently covered up.

These reports assure readers that Roswell was not in fact a cover-up, but offer several possible explanations as to the origins of Roswell, including failed Air Force tests during experimentation with aircraft, misidentified debris from crashed military weather balloons, and even crash test dummies that were mistaken for aliens. The military provided eye-witness accounts to back up these explanations and even images of officers and equipment involved in the various programs.

To offer a stimulating and controversial counterpoint to these explanations, Cosimo includes Forewords in each volume from author and ufologist Stanton Friedman. Friedman, who has studied extensively the Roswell accounts and consulted for Roswell documentaries, is not satisfied with the military's explanations; indeed, he produces compelling arguments explaining why the government's stories don't make sense or match up with the actual evidence.