May Series of the Month: The Conquests of Mexico and Peru 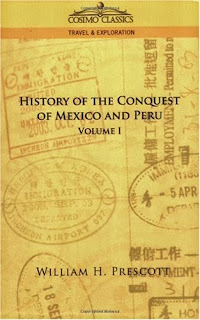 In honor of Cinco de Mayo and the celebration of Mexican ethnicity, Cosimo is happy to announce The Conquests of Mexico and Peru as our Series of the Month.


With its vivid language and bold strokes, the magnificent History of the Conquest of Peru two volume set, first published in 1847, is one of historian William Prescott's landmark works. A masterly study of Spanish conquistador Francisco Pizarro's overthrow of the Inca Empire, this astonishing chronicle is considered a classic of Latin American history.

Perhaps the most important work of Latin American history, it is "one of the most brilliant examples which the English language possesses of literary art applied to historical narration," raves Prescott biographer Harry Thurston Peck. "All the chief actors of his great historic drama not only live and breathe, but they are as distinctly differentiated as they must have been in life."

Also available from Cosimo Classics: History of the Conquest of Peru, Prescott's companion volume about Pizarro's subjugation of the Incans.

About the Author
Historian, writer, and scholar William Hickling Prescott (1796-1859) was born in Salem, Massachusetts. A regular contributor to the prestigious Boston literary journal North American Review, he also authored numerous books of history, including 1837's The History of the Reign of Ferdinand and Isabella the Catholic, a critical and popular success in both America and Europe.


Posted by Cosimo, Inc. No comments:
Email ThisBlogThis!Share to TwitterShare to FacebookShare to Pinterest
Labels: Cinco de Mayo, Cosimo series, History, History of the Conquest of Peru, Inca Empire, Series of the Month, The Conquests of Mexico and Peru, William Hickling Prescott

May Classic of the Month: Letters to a Friend by John Muir 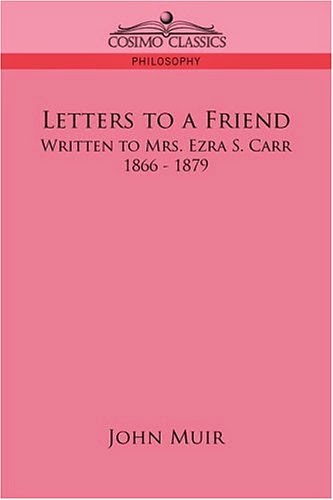 With spring finally here, Cosimo is proud to present Letters to a Friend by John Muir as our classic of the month.

Perhaps the most important of the founders of the modern conservation movement and an immense influence on animal-rights philosophies, John Muir was a champion of the preservation of unspoiled wilderness. His studies and surveys of Yosemite Valley and the Sierra Nevada mountains in the late 19th century-and his love of their untamed beauty-led directly to federal protection of vast ranges of virgin Western lands. This collection of letters Muir wrote as a university student in the 1860s and '70s to his "spiritual mother," botanist Mrs. Ezra Carr, offer a fascinating look at the legendary naturalist as a young man. Dispatched mostly from Yosemite Valley, where he was working as a sheepherder, they reveal the shaping of the philosophies that would later dominate Muir's work. A legend of the American West and the careful guardianship of the environment––as well as the freedom the natural world represents––Muir's writings are a must read for anyone who appreciates the wild splendor of our planet.

Letters to a Friend is available in hardcover and paperback at leading online bookstores, including Amazon and Barnes & Noble.

Scottish-American naturalist, explorer, and writer JOHN MUIR (1838-1914) helped found the Sierra Club in 1892, and served as its first president. He wrote numerous articles for such publications as Atlantic Monthly, Harper's, and the New York Tribune; among his many books are The Mountains of California (1894), Our National Parks (1901), The Yosemite (1912), and Travels in Alaska (1915).