October's Book of the Month Is Founding a Movement: Women's World Banking, 1975-1990 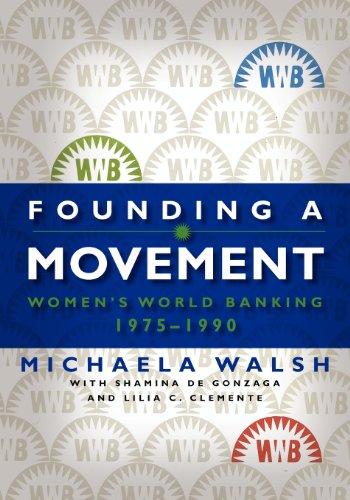 Cosimo's Book of the Month for October is our newest release, Founding a Movement: Women's World Banking, 1975-1990, a detailed history of  f the first global women's microfinance organizations, run by women, for women. Its history is told by founder Michaela Walsh, who was president and CEO of the company from its inception at 1975 until 1990. Chalk full of interviews from the organization's first board members and participants, it follows the difficult path WWB took to recognize its dream and make small businesses a reality for so many women around the world.

Founding a Movement shows how hard work and perseverance, not to mention a helping hand from fellow entrepreneurs and business owners, can help anyone take control of their economic destinies. In the words of Michaela Walsh, this book "shines a light on the value that women contribute through work, and when they support one another, to become full participants in the economy through access to financial institutions and services, and everything that goes with that access."

The book has received numerous praises from key business leaders, economists, and international icons. You can read more about it in the official press release, or on the author's website at michaelawalsh.com.

"The power of women teaching one another is profound. Women's World Banking was one of the first movements to realize and trust this truth at a global scale. This is what made it a transforming movement."
-The Honorable Ellen Johnson Sirleaf, president of Liberia and Nobel Laureate

"At last, the full inside story of the founding mothers of microfinance... by one of its key leaders! Indispensable reading!"
-Hazel Henderson, president of Ethical Markets Media and Creator of the Green Transition Scoreboard

"Women's access to finance, including microcredit, is crucial. Michaela Walsh and Women's World Banking have broken new ground. Those who wish to follow in their footsteps should read this story."
-Jan Pronk, former Minister for International Development Cooperation of the Netherlands


Michaela Walsh is an activist, scholar, mentor, educator, and author. She has been a pioneer female manager for Merrill Lynch, the first female partner at Boettcher, and the founding president of Women's World Banking. She has taught at Manhattanville College, served on the Boards of several institutions, and was the chairperson of the 59th United Nations DPI/NGO Conference in 2006.She has received numerous awards,including in honor an honor in 2012 from Women's Funding Network for changing the face of philanthropy.
Posted by Cosimo, Inc. No comments:
Email ThisBlogThis!Share to TwitterShare to FacebookShare to Pinterest
Labels: biography, Book of the Month, cosimo books, founding a movement, Lilia C. Clemente, michaela Walsh, microcredit, Shamina de Gonzaga, small business, Women, women entrepreneurs, women's world banking, WWB

"The Men Who Built America"

There is a series on the History Channel called "The Men Who Built America" about famous men who changed the American landscape as we know it: John D. Rockefeller, Cornelius Vanderbilt, Andrew Carnegie, Henry Ford, and J.P. Morgan. The show's summary explains, "These men created the American Dream and were the engine of capitalism as they transformed everything they touched in building the oil, rail, steel, shipping, automobile and finance industries..."

Cosimo carries several biographies and histories about all these great men, and others like them. If you're a fan of the History Channel and want to know more about these historical figures, check out our bookstore. You can read books by and about Andrew Carnegie, Henry Ford,  John D. Rockefeller, Cornelius Vanderbilt, and soon, J. P. Morgan. Read and learn about the history of America and the faces who made it.

Halloween is Coming! Check Out Our Collection of Creepy Crawly Cryptozoology Books!

Halloween is next Wednesday, but you don't need to wait a whole week to get spooked! Cosimo Author Loren Coleman is also a world-renowned cryptozoologist, and he offers a collection of books that will satisfy even the most skeptical minds. He has written introductions to classic books with an eye toward the strange, creepy, and the unknown. Check out titles on werewolves, dragons, mythical monsters, sea serpents, and giant birds.

As always, be sure to read Coleman's bestselling Bigfoot: The True Story of Apes in America, Abominable Snowmen: Legend Come to Life (in preparation for the winter solstice), and Mothman and Other Curious Encounters. That way, after your trick-or-treating is finished and the parties have come to a close, you can curl up with a cup of hot chocolate and thoroughly frighten the night away.

Also, check out Loren Coleman's cryptozoology site Cryptomundo for the latest about Bigfoot. This week, the Patterson-Gimlin film turned 45 and there is breaking news about an upcoming Bigfoot film. Check out his website for more!

Praise for Mystic Journey: Buy the Book Everyone's Talking About

Since its release, our title Mystic Journey has gotten quite the response from readers and reviewers. Author Robert Atkinson was interviewed by both the Portland Press Herald and Spiritual Media Blog about his background in spirituality and life stories. These discussions clarify his book and his purpose behind writing it, creating deeper meaning for the readers.

Additionally, Atkinson's book received several positive reviews around the 'net, including on the book's Amazon page, and from spirituality and book bloggers, such as Evolutionary_Mystic, Dad of Divas, and Book Bargains and Previews.

See what they have to say below, check out the full reviews for yourself, and pick up your own copy of Mystic Journey!

The book ... provides a magnificent template for the mystical traveler: knowing what is achievable through conscious effort; seeing in the oscillation of opposites the possibility of their union; recognizing that the respolution of such a procession of opposites in our lives is designed to move us closer to our Creator; and understanding that our deepest spiritual transformation comes about not through escape from the world but from work in the world, as service to humanity.

This book is deep, and makes anyone who reads this delve deeper within themselves to understand not only their own spirituality, but also one's own spiritual and conscious self.

Thought-provoking and powerful, valuable reading for those searching for deeper meaning to life.

This book takes an interesting look at developing the whole person, body, mind, and spirit and how expressing our life stories can help us come to know who we really are and what our life's calling is. This is a thought-provoking and compelling read for those who are searching for the meaning of life.

--Allie B. from Book Bargains and Previews

The Institute of Noetic Sciences, founded by Apollo 14 astronaut Edgar Mitchell, known for bridging ancient wisdom and modern science to explore the web of our interconnection through education, community, and applications, is celebrating its 40th anniversary with a number of events, including:


Edgar Mitchell is the author of Psychic Exploration, along with a number of experts on psychic phenomena and the paranormal.
Posted by Cosimo, Inc. No comments:
Email ThisBlogThis!Share to TwitterShare to FacebookShare to Pinterest
Labels: 40th Anniversary, cosimo books, Edgar Mitchell, IONS, Psychic Exploration, Save the Date
Newer Posts Older Posts Home
Subscribe to: Posts (Atom)