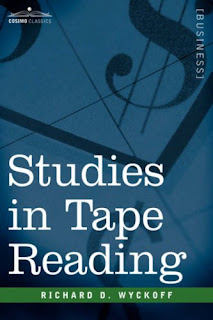 "One cannot become a Tape Reader by giving the ticker absent treatment; nor by running into his broker's office after lunch, or seeing "how the market closed" from his evening newspaper.... He should spend twenty-seven hours a week at the ticker, and many more hours away from it studying his mistakes and finding the "why" of his losses." - from Studies in Tape Reading

This fabulous classic was recently referenced and quoted Wyckoff on a well-known trading blog, thedangerpoint.com, saying "to understand the present, we need to understand the past: especially with stock market activity."


A 1910 classic of technical stock-market analysis, this is considered the most important work of one of the great market watchers of the early 20th century. It covers: stop orders and trading rules, volumes and their significance, market technique, "dull markets" and their opportunities, and much more. Nearly a century later, this primer on the basic laws of the market is still an invaluable resource for the broker or serious individual trader.

About the Author
Richard D. Wyckoff (aka Rollo Tape) was publisher of Ticker Magazine, later known as The Magazine of Wall Street.