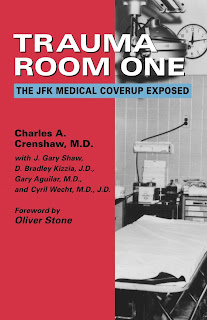 As the commemorations of the 50th anniversary of the March on Washington by the Rev. Dr. Martin Luther King Jr. are hardly behind us, attention is now shifting to the upcoming 50th anniversary of the assassination of President John F. Kennedy on November 22. The New York Times reports on the various media and events preparing for this commemoration:

"newsstands making space for "photo-heavy commemorative issues....bookstores are crowded with new volumes re-examining the single-gunman theory ... movie theaters and television sets will recreate the glory and the tragedy... visitors flocking to the Washington based Newseum exhibit of JFK.  So many authors have seized on the moment that an Amazon.com search turned up about 140 Kennedy-related books being released or rereleased this year..........Next month, Tom Hanks will release “Parkland,” named for the hospital where Kennedy died, ...... ReelzChannel will broadcast a second-gunman documentary called “JFK: The Smoking Gun.” And Stephen Gyllenhaal is making “The Kennedy Detail” about the president’s Secret Service agents, to be released next year,.........etc. etc. " While there may be lot of worthwhile new books, articles and movies being released, I think just reading
a book by the doctor who tried to save President Kennedy in the Dallas hospital emergency room will shed light on what happened on that infamous day of Presidential history: Trauma Room One: The JFK Medical Cover Up Exposed by Charles A. Crenshaw (who is one of the Dallas surgeons who worked on JFK in Trauma Room One) and by Gary Shaw, with a foreword by Oliver Stone (for full disclosure I was the publisher of the revised edition in 2001; the original edition was published in 1992.)
See for further background my previous post of July 29, 2013: John F. Kennedy's Assassination Revisited.  See also the various editions (the paperback, hard cover or Kindle edition) of Trauma Room One: