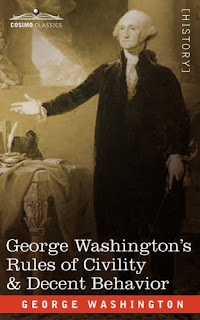 In the spirit of giving during this holiday season, we are highlighting George Washington's Rules of Civility & Decent Behavior as our eBook of the month.

The history of George Washington’s Rules of Civility &Decent Behavior is a bit unusual and unclear; scholars seem to agree that Washington’s 110 rules are the result of a penmanship exercise, in which a teenage Washington copied a set of maxims originally compiled by French Jesuits in the 1590s. Somehow the translated text found its way to Virginia, and somehow it was assigned to a young Washington as an educational exercise. The result is a collection of maxims (with either Washington’s or his instructors’ additions) that dictate the behavior of a young man in civil society.

Washington’s Rules of Civility were part of his personal papers, purchased by Congress and now housed in the Library of Congress. Many historians consider this document a sort of “foundational  document” that details the tenets which later governed Washington's behavior as an adult. Indeed, Washington was known for his kindness and deportment, though it is mere speculation that the Rules contained in this penmanship exercise are the root of Washington's civility.

Statesman or no, George Washington's Rules of Civility & Decent Behavior is a fascinating and informative historical text detailing the rules of behavior for a bygone era—many of which are still pertinent today. Rules dictates the behavior of one in company, emphasizing kindness, conscience, and cleanliness. While today’s reader may not need reminding to keep their feet away from “the fire, especially if there be meat before it,” many of the Rules hold true today.