July Classic of the Month: The Roswell Report: Case Closed 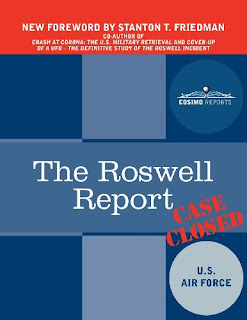 We are kicking off the month of July with our wide array of UFO titles, first up: The Roswell Report: Case Closed.

Colonel Richard L. Weaver and First Lieutenant James McAndrew, at the request of Congressional Representative Steven Schiff (R-NM), sifted through old reports in order to explain the events that occurred in July 1947, which became known as the Roswell Incident. Included in the report known as Fact versus Fiction are references to Air Force experiments conducted at the time of the crash landing that could account for the debris discovered and investigated.

Case Closed includes further analysis and discussion of the events. The Foreword explains, "Our objective throughout this inquiry has been simple and consistent: to find all the facts and bring them to light. If documents were classified, declassify them; where they were dispersed, bring them into a single source for public review."

These reports, originally published in 1995 and 1997 respectively, include an all-new introduction from UFO-expert Stanton Friedman. The U.S. Air Force is the aviation branch of the United States military. The headquarters of this branch authorized several research projects on the origin and existence of UFOs and published multiple reports of their findings from the 1950s through the 1980s. It is still the subject of speculation today whether the U.S. Air Force is responsible for a large-scale cover-up of UFO and extraterrestrial evidence.


For those interested in learning more about Roswell and what took place there in 1947, there will be a UFO Festival happening this weekend! Visit roswellufomuseum.com for more on lodging, speakers, and tickets.