August Quote of the Month: The Mueller investigation is complete and this is a simple fact that will never go away: not one single American was charged, indicted or convicted for conspiring with Russia to influence the 2016 election.” 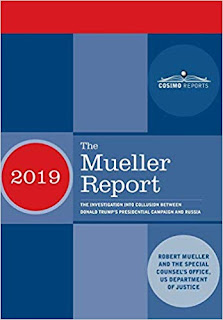 "The Mueller investigation is complete and this is a simple fact that will never go away: not one single American was charged, indicted or convicted for conspiring with Russia to influence the 2016 election.”
—Glenn Greenwald, journalist, 2019

Our August quote of the month comes from our August Book of the Month, The Mueller Report: The Investigation into Collusion between Donald Trump's Presidential Campaign and Russia by Robert Mueller.

One of the most important political investigations in American history is Robert Mueller's inquiry into President Donald Trump's possible collusion with Russia. This investigation has engulfed US politics and US–Russia relations for the last two years, reaching levels of hysteria among political pundits and the media. Was it a “witch hunt,” as Trump supporters believed, or a necessary look into impeachable offenses?

In May 2017, Mueller was appointed to head the Special Counsel's Office investigation of the Russian government's efforts to interfere in the 2016 presidential election, including possible coordination between Donald Trump's campaign and the Russian government, as well as “any matters that arose or may arise directly from the investigation.”  In addition, Mueller also took over several other existing FBI investigations, including those into former Trump campaign chairman Paul Manafort and former national security advisor Michael Flynn.

Although this investigation resulted in dozens of indictments for federal crimes, and at least eight guilty pleas or convictions, no American was charged, indicted, or convicted for conspiring with Russia to influence the 2016 election. Mueller submitted his report to attorney general William Barr on March 22, 2019, the findings of which are now available for everyone to read. This publication also includes two separate letters from Barr to the Senate Judiciary Committee detailing the findings of the report before its release. Students of politics, historians, journalists, and anyone interested in US politics will find this report vital reading.


About the AuthorRobert S. Mueller III (born 1944) is an American attorney, who spent the bulk of his career in government service, serving as a US attorney, homicide prosecutor, and director of the FBI (2001-2013). A life-long Republican, he has served Democratic and Republican presidents, enjoying broad bi-partisan support.