September Series of the Month: Bibliography of Forbidden Books 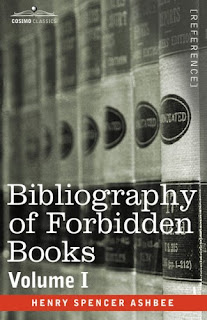 In these scary Orwell-like times, Cosimo is celebrating Banned Books Week with Bibliography of Forbidden Books by Henry Spencer Ashbee as our Series of the Month for September!

About the Author
British book collector, travel writer, and bibliographer Henry Spencer Ashbee (1834-1900), aka Pisanus Fraxi, is thought by some to have authored the notorious Victorian sexual memoir My Secret Life.

About the Organization
Banned Books Week was launched in 1982 in response to a sudden surge in the number of challenges to books in schools, bookstores and libraries. The 2019 celebration will be held September 22  -September 28, the theme this year is Censorship Leaves Us in the Dark. To find an event near you, please visit the Banned Books website.

The paperback retail list price for the series is $74.97, but now: our price: $59.99 (you save $15 or a 26 percent discount)
Posted by Cosimo, Inc.
Email ThisBlogThis!Share to TwitterShare to FacebookShare to Pinterest
Labels: Banned Books Week, Bibliography of Forbidden Books, Censorship Leaves Us in the Dark, classic books, Cosimo series, George Orwell, Henry Spencer Ashbee, pornography, Series of the Month