October Quote of the Month: "Loren Coleman has taken a hard look at one of America’s most haunting monsters and discovered that it’s more terrifying than we ever knew." 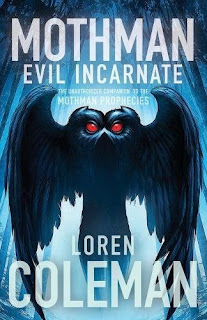 "Loren Coleman has taken a hard look at one of America’s most haunting monsters and discovered that it’s more terrifying than we ever knew."

Our October Quote of the Month is so spooky, it refers to not one, but two books! Mothman and Other Curious Encounters and Mothman: Evil Incarnate, both by Loren Coleman, are our featured titles for this month's quote from Richard Hatem.


On November 15, 1966, a huge, red-eyed creature with wings appeared over Point Pleasant, West Virginia. Thus began thirteen months of otherworldly mystery, madness, and mayhem for the people of Point Pleasant, culminating in the collapse of the Silver Bridge, which left 46 dead.

But contrary to popular belief, Mothman is not a one-off phenomenon. Leading cryptozoologist and investigator Loren Coleman looks at the precursors of Mothman, like the Flatwoods Monster of 1952, then brings the story up to date, detailing the sightings of the spawn of Mothman at the beginning of this century. Coleman also examines the impact on investigations into the unknown by John Keel, the newsman who spend a year in Point Pleasant looking into the Mothman story and lived to write about it.

Mothman: Evil Incarnate, by cryptozoologist Loren Coleman, is the new companion title to the late John Keel's The Mothman Prophecies (1975), which investigated the sightings of a winged creature called Mothman and became popularized in the 2002 movie of the same name starring Richard Gere.

With new material by Loren Coleman, extensive annotations on each chapter of The Mothman Prophecies, a detailed Mothman death list, and a gallery of images, Mothman: Evil Incarnate comprises the most up-to-date information on Mothman phenomena. In addition to providing context to John Keel's cult classic, Coleman expands on missing details from the movie, explores the deaths that followed the West Virginia incident, describes the recent Chicago Mothman sightings, and delves into the life of John Keel. This companion book should find its place on every Mothman aficionado and cryptozoology fan's bookshelf. The mystery continues!

About the Author
Loren Coleman is one of the world's leading crypozoologists. In 1960 he started his fieldwork, and after years pursuing cryptozoological mysteries, he began writing. He is the author of numerous books on cryptozoology, including Bigfoot: The True Story of Apes in America and Mothman and Other Curious Encounters. Coleman is the founder and director of the International Cryptozoology Museum in Portland, Maine (www.cryptozoologymuseum.com). Loren Coleman can be followed on Twitter at @CryptoLoren and on his blog, www.cryptozoonews.com