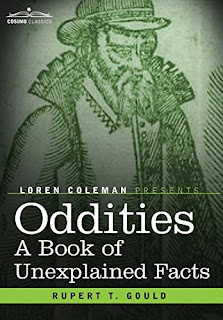 We are highlighting our very popular Loren Coleman Presents Series as our Series of the Month, so break out the spooky costumes, scary stories, and all things that go bump in the night — it's October!

Loren Coleman one of the world's leading cryptozoologists,  has been seeking evidence and folklore since the Abominable Snowmen caught his interest more than five decades ago.

Loren Coleman has selected some of the most fascinating and also rare books from the time when the term 'cryptozoology" did not yet exist. This series brings to light some of the curiosities and wonders from zoology but also from myths and folklore. Coleman provides each title with a reflective introduction explaining the context and meaning of each of those significant works of cryptozoology. From werewolves to dragons, from sea monsters to unexplained myths, Coleman explores it all.


The series includes the following titles, both in paperback and hardcover:

Gleanings From the Natural History of the Ancients by Rev. Morgan Watkins

Oddities: A Book of Unexplained Facts by R.T. Gould

Snakes: Curiosities and Wonders of Serpent Life by Catherine Hopley

The Book of Werewolves by Sabine Baring-Gould

The Dragon, Image and Demon by Hampden DuBose

The Dragon in China and Japan by M.W. de Visser

The Romance of Natural History by Philip Gosse

The Unicorn: A Mythological Investigation by Robert Brown

The Werewolf by Montague Summers

Cosimo offers this series by individual volume at leading online bookstores or as a volume set in hardcover and paperback. If you are interested in purchasing the full set, please contact us.

Our special set price for this unique series in paperback is: $249.99 (from the combined official list price of $332.79: you save $82.80 or a 25 percent discount and get free shipping)
Posted by Cosimo, Inc.
Email ThisBlogThis!Share to TwitterShare to FacebookShare to Pinterest
Labels: American folklore, Bigfoot, Cosimo series, Halloween, Mothman, scary stories to tell in the dark, unexplained phenomenons, Unidentified creatures, vampires, Werewolves