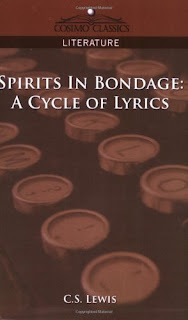 In honor of his birthday on November 29th, we are showcasing Spirits in Bondage: A Cycle of Lyrics by C.S. Lewis!

C. S. Lewis is a profound and perhaps the most respected Christian apologist because his belief was so hard-won. This collection of verse, written immediately after he returned from the battlefields of World War I in 1919, offers penetrating insight into the psyche of a young man struggling with traumatic wartime experiences and the crisis of faith they engendered.

By turns angry, bitter, and melancholy, these poems constitute a provocative document of Lewis's journey from atheism through agnosticism and on to conviction.

About the Author
Irish writer Clive Staples ("Jack") Lewis (1898-1963) was born in Belfast. A volunteer in the British Army during World War I, he served in the trenches of France, and returned to study and teach at Oxford University; he later accepted a post at Cambridge University, retiring only months before his death. His best-known works are The Chronicles of Narnia (1950-1956), Mere Christianity (1952), and his autobiography, Surprised by Joy (1955).
Posted by Cosimo, Inc.
Email ThisBlogThis!Share to TwitterShare to FacebookShare to Pinterest
Labels: C.S. Lewis, Cambridge University, J. R. R. Tolkien, Joy Davidman, Pauline Baynes, Prince Caspian, The Dark Tower, The Lion, The Pilgrim's Regress, the Witch and the Wardrobe