November Series of the Month: The Works of Robert G. Ingersoll 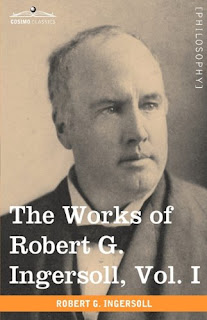 We are shining the spotlight on this controversial election month, midterms, and America politics, by reading The Works of Robert G. Ingersoll as our Series of the Month.

Legendary as a speaker—he memorized his speeches and could talk for hours without notes—and as a proponent of freethought, Ingersoll is an American original whose words still ring with truth and power today. His most important works are gathered in this 12-volume collected edition, first published posthumously in 1901.

Go out and vote! Not sure where you stand? Check out this handy tool here.

The hardcover retail list price for this series is: $407.88, but now our price is: $324.99 (you save $82.89 or a 20 percent discount)
Posted by Cosimo, Inc.
Email ThisBlogThis!Share to TwitterShare to FacebookShare to Pinterest
Labels: American History, Cosimo series, Current Politics, Mid-term elections, President Trump, Series of the Month, The Works of Robert G. Ingersoll