In light of the Occupy Wall Street marches today supporting the ConEdison strike and a country-wide increase of the minimum wage, it seems like a good time to promote July's book of the month, Occupy: Dissecting Occupy Wall Street, by Danny Schechter.

Danny, known popularly as the News Dissector, has long commented on social protests and the ills of Wall Street and the big banks. He predicted the burst of the housing bubble and the collapse of the economy with his book Plunder and the follow-up documentary, Plunder, The Crime of Our Time. He regularly visits South Africa and wrote about the reform that was needed in that country on his blog and in Blogothon. The point is, he has long history of being interested in social and economic reform, the evidence of which can be seen in his many blog posts and articles. 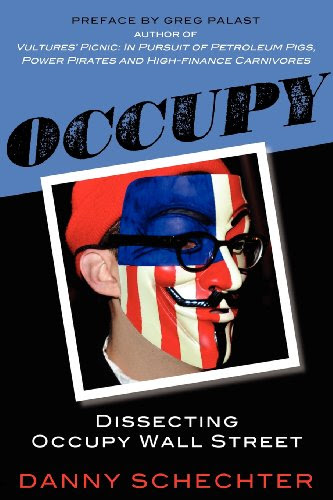 So it's safe to say that Danny knew what he was talking about when he reviewed and participated in the Occupy Wall Street protests that took place last fall and winter. Occupy is a collection of blog posts and articles from September through December of 2011, when Occupy Wall Street was at the height of its campaign. Danny studies how the movement started, what it did well, and how it could improve. He was well-placed to do so, considering his background working with other political reform movements like the March on Washington and Spain's "Tahrir Square" in Madrid's Puerta Del Sol in June of last year.

Occupy is an interesting and in-depth study of the inner-workings of a movement created by regular citizens who just want to make a difference. You can read the press release for more details and check out the ebook version for only $7.99.

Danny Schechter is a writer, television producer, and independent filmmaker who also speaks about media and financial issues. He is the editor of Mediachannel1.org and blogs daily as the News Dissector at NewsDissector.net. Schechter is the author of fourteen books and has produced and directed more than thirty documentaries and television specials. His blog was named the 2009 “Blog of the Year” by the Hunter College Media Department of the City University of New York. You can follow him on Twitter at @dannyschechter and @DISSECTOREVENTS.
Posted by Cosimo, Inc. No comments:
Email ThisBlogThis!Share to TwitterShare to FacebookShare to Pinterest
Labels: Book of the Month, ConEdison Strike, Danny Schechter, Economy, March on Washington, minimum wage, News Dissector, Occupy, OWS, tahrir square

In honor of Jeanne Avery, actress, astrologer and author

With sadness we recently heard of Jeanne Avery's passing away earlier this year. After a successful acting career, Jean Avery became a professional astrologer in the 1960s. She wrote a very popular daily astrology column which appeared in hundreds of newspapers in the 1970s and 1980s. She wrote books, the first of which was The Rising Sign: Your Astrological Mask (1982, Doubleday). Followed by five more books, three of which, we are proud to have republished as Paraview titles:

In all her astrology work, Jean Avery emphasized that astrology is not a crystal ball. "Astrology is like a road map," she frequently said. " It helps us to upgrade the quality of our choices. You can choose to take the superhighway to your destination or you can choose to take the back roads. Either way, you're the one to make the choices. An understanding of astrology gives us more control over our lives, not less."

Jean Avery was a popular speaker and workshop leader at conventions. She was a member of the American Federation of Astrologers, a board member of the National Association for Transpersonal Psychology, and was listed in Who's Who in the World, Who's Who in the East, and Who's Who for Women.
Posted by Cosimo, Inc. 38 comments:
Email ThisBlogThis!Share to TwitterShare to FacebookShare to Pinterest
Labels: Astrology, Authors, In Memoriam, Jeanne Avery, Psychology

Dr. Edward Bruce Bynum and Dark Light Consciousness, A New Book About the Power of Melanin and the African American Tradition

On June 19, psychologist and author Edward Bruce Bynum released a new book on the African tradition with Inner Traditions Press. In Dark Light Consciousness: Melanin, Serpent Power, and the Luminous Matrix of Reality, Dr. Bynum explores the consciousness and the superconsciousness of individuals and the universe, using science and ancient African and Indian traditions to help readers tap into their minds and bodies.

The back cover copy explains,

Within each of us lies the potential to activate a personal connection to the superconscious. Called “Ureaus” in ancient Egyptian texts and “Kundalini” in ancient Hindu yoga traditions, our innate serpent power of spiritual transcendence inhabits the base of the spine in its dormant state. When awakened, it unfurls along the spinal column to the brain, connecting individual consciousness to the consciousness of the universe enfolded within the dark matter of space. At the root of creativity and spiritual genius across innumerable cultures and civilizations, this intelligent force reveals portals that enfold time, space, and the luminous matrix of reality itself.


Combining physics, neuroscience, and biochemistry with ancient traditions from Africa and India, Edward Bruce Bynum, Ph.D., explores the ancient Egyptian science of the Ureaus and reveals how it is intimately connected to dark matter and to melanin, a light-sensitive, energy-conducting substance found in the brain, nervous system, and organs of all higher life-forms. He explains how the dark light of melanin serves as the biochemical infrastructure for the subtle energy body, just as dark matter, together with gravity, holds the galaxies and constellations together. With illustrated instructions, he shows how to safely awaken and stabilize the spiritual energy of the Ureaus through meditation practices, breathing exercises, and yoga postures as well as how to prepare the subtle body for transdimensional soul travel.

Fans of Dr. Bynum's work know that he uses his psychological and scientifc background to assess the human brain, whether it be dreams, humanity's African roots, or the consciousness and the soul. He continues this trend with Dark Light Consciousness, earning praise for his research. Teri Degler, author of The Divine Feminine Fire and the Fiery Muse commented, “In this fascinating book, Edward Bynum throws down a gauntlet to science that may very well result in the most revolutionary research ever done on consciousness. His groundbreaking ideas challenge not just what we know about enlightenment but the very nature of light itself and--more importantly for each and every one of us--our journey toward it.”

Other of Dr. Bynum's works include Families and the Interpretation of Dreams (Paraview Special Editions, 2003), Why Darkness Matters: The Power of Melanin in the Brain (African American Images, 2005), The Roots of Transcendence (Cosimo Boks, 2006), The Family Unconscious (Cosimo Books, 2006), and The African Unconscious: Roots of Ancient Mysticism and Modern Psychology (republished by Cosimo Books, 2012).
Posted by Cosimo, Inc. No comments:
Email ThisBlogThis!Share to TwitterShare to FacebookShare to Pinterest
Labels: African Americans, Authors, Book, Dreams, Psychology, Publishing

As I was scanning some old emails, cleaning out my inbox, I found a link to a New York Times book review someone had sent me when we first started re-publishing the impressive 51-volume Five-Foot Shelf of Classics. The review--for Christopher Beha's The Whole Five Feet: What the Great Books Taught Me about Life, Death, and Pretty Much Everything Else--discusses not only the premise of the book, but also the history of the Five-Foot Shelf.

Christopher was a young, struggling writer, barely employed and in mountains of debt, when he decided to quit his job, move into his parent's Manhattan apartment, and dedicate a year to reading copies of the Harvard Five-Foot Shelf of Classics that were moldering in the attic. What follows is a year fraught with illness, death, depression, and learning. Beha read the books through a favorite aunt's bought with leukemia and subsequent passing, his own battle with Lyme disease, and a torn meniscus. Beha shows how the books helped him through a difficult time in his life, providing candid and thought-provoking reviews of the some of the world's most well-known books.

The Five-Foot Shelf is a collection of books compiled by Harvard president Charles Eliot as a way for people who couldn't attend Harvard to get a literary education with some of the best and most well-known classics around the world. The collection includes titles such as The Autobiography of Benjamin Franklin, The Complete Poems of John Milton, Ben-Hur, The Origin of Species, Don Quixote, The Odyssey, and Beowulf. Now anyone can own the set for themselves, to further their education, enrich their mind, and make their own assessment, like Beha. Cosimo offers this unique 51-volume series in paperback and hardcover at attractive pricing, if you don't already own the set or would like a newer version than the one in your parent's basement. You can also order books in the set individually if you simply need to complete your series.
Posted by Cosimo, Inc. No comments:
Email ThisBlogThis!Share to TwitterShare to FacebookShare to Pinterest
Labels: Christopher Beha, classics, Five Foot Shelf, Harvard, memoir

Last week, Frans Verhagen, author of The Tierra Solution (Cosimo's June Book of the Month) had a conversation with Susanna Greenberg on BlogTalk Radio about the book and the state of the climate. Verhagen discussed the current climate crisis and what is currently being done to solve those problems, currency problems and moving toward a standard currency, what a carbon standard is and why it is more beneficial than any other standard, and the benefits of the Tierra Fee and Dividend System.


This book and talk comes on the heels of the Rio+20 conference in Brazil, where "world leaders, along with thousands of participants from governments, the private sector, NGOs and other groups, [came] together to shape how we can reduce poverty, advance social equity and ensure environmental protection on an ever more crowded planet to get to the future we want."
Posted by Cosimo, Inc. No comments:
Email ThisBlogThis!Share to TwitterShare to FacebookShare to Pinterest
Labels: carbon footprint, carbon reduction, Climate Change, climate crisis, Economy, environment, finance, Frans Verhagen, global finance, Global Warming, Rio+20, sustainability, virtual book tour
Newer Posts Older Posts Home
Subscribe to: Posts (Atom)