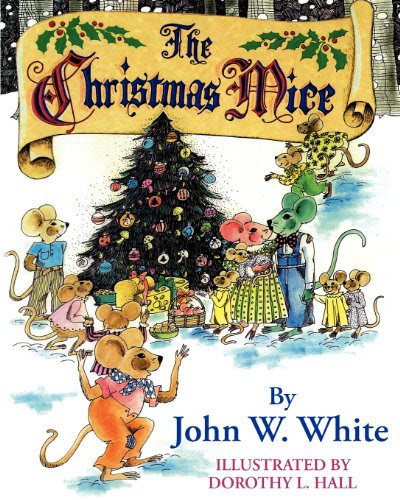 The Christmas Mice, by John White, with Illustrations by Dorothy L. Hall, $8.99

The Christmas Mice, a tale for children, is a heartwarming story of love and acceptance. It tells of two mice who are outcasts from their community because they are different. One is green, the other is red—the colors of Christmas. Encouraged by the birth of his children and the beauty of a Christmas tree, Roger teaches the rest of the meadowmice an important lesson about love and brotherhood. As the two main characters gain acceptance and understanding from the other mice, the importance of peace and oneness of all life is sensitively communicated. The Christmas Mice is a touching tale with a powerful message that will delight young readers of all ages.

Dialogues with My God Self: Understanding the Law of Love, by Alvaro Bizziccari, $29.99

Dialogues with My God Self is a unique look into the heart and mind of a seeker of truth and his God Self. Written as a series of conversations addressing life’s most important questions, this groundbreaking work is the result of years of philosophical study, travel, meditation, and the search for enlightenment, provoked by the desire to understand our existence and its Source.

Dialogues with My God Self will resonate with anyone seeking spiritual insight and striving for a higher consciousness. It offers clear and insightful answers to timeless questions such as:

Founding a Movement captures the impossible dream realized by a visionary group of women who met in Mexico City at the first United Nations World Conference on Women in 1975, and then, together, created the first global women’s microfinance network. Drawing on more than 80 interviews, Michaela Walsh recounts her extraordinary path as the founding president of Women’s World Banking and brings alive the perseverance, confidence, and shared risk-taking that propelled the movement forward. This book illuminates the birth of a culture of trust—from Kenya to Colombia to the Philippines—where women entrepreneurs could learn from and teach each other to gain control over their economic destinies.
In Walsh’s words, Founding a Movement “shines a light on the value that women contribute through work, and when they support one another, to become full participants in the economy through access to financial institutions and services, and everything that goes with that access.”

Mystic Journey: Getting to the Heart of Your Soul's Story, by Robert Atkinson, with a Foreword by Marion Woodman, $12.99

When we live our lives consciously, universal motifs, archetypes, and timeless patterns emerge through which we discover not only who we are but also why we are deeply connected to all others. This is life’s greatest adventure; it is thoroughly described in the world’s wisdom traditions. Mystic Journey uses a multi-faith approach to reveal the path of the soul; this not a solitary quest but rather a superhighway meant for everyone. As we explore the deeper story of our soul, we also discover that we are living a lifelong process of soul-making, leading us ultimately to personal and collective transformation. Getting to the heart of your soul’s story is soul-making. Mystic Journey guides readers to:

• Use their life stories to help solidify their identities,
• Live with an eternal perspective in mind, and
• Reclaim their common spiritual heritage.

The Tierra Solution: Resolving Climate Change Through Monetary Transformation, by Dr. Frans Verhagen, with a Foreword by Felix Dodds, $19.99

As climate change continues to threaten the earth and as the global financial crisis lingers, governments and communities need to take charge of their own and global monetary systems.  Sustainability sociologist Frans Verhagen proposes a solution—the Tierra Solution—to repair the present global monetary, financial, and economic systems that enrich the few, impoverish the many, and imperil the planet. Verhagen calls for transformational changes in order to advance climate-resilient economic development.  The Tierra Solution proposes:

- A credit-based financial system governed by a Global Central Bank,
- A banking system without the privilege of money creation, and most importantly,
- A carbon standard for the international monetary system with the Tierra as the unit of account.

The Tierra Solution is an in-depth and thought-provoking read that shows an innovative path for global citizens who want to combat climate change, the economic crisis and poverty, and for public officials, economists, international development experts, and climate scientists who want to be part of an integrated solution to the dual challenges of climate change and financial crises.

“It’s So Not Over” is the new slogan of Occupy Wall Street.

As the filmmaker behind In Debt We Trust (2006) and Plunder: The Crime of Our Time (2010), Danny Schechter has specialized in exposing Wall Street crime in three books and many reports. He says, “This is the movement we have been waiting for to ‘fight the power.’ Even as debt strangled millions, and unemployment rose alongside foreclosures, economic issues only remained fodder for boring pundits and self-styled experts. There was no activist response. Until now.”

Schechter explains, “Occupy Wall Street has a way of touching you personally with its gutsy honesty and democratic spirit. Yet, I was not always uncritical. I want it to succeed, but I’m also aware of its many contradictions and internal conflicts.” Occupy provides the News Dissector’s in-depth assessment of a global revolt in the making.

Blogothon: Reflections and Revelations from the News Dissector, by Danny Schechter, $17.99

In just a decade, blogging changed from a fad to a phenomenon with an estimated 51 million participants, mostly creative citizens with something to say or express. Citizens who want to participate in media rather than be subjected to it.

Blogothon is a selection of blogs and essays posted by raconteur par excellence, gadfly of the media, and “News Dissector” Danny Schechter in an award-winning daily blog that he began writing in 2000. In Blogothon Schechter demonstrates the importance of blogging as an alternative media in an age when mainstream media has come under increasing scrutiny for a lack of credibility, real news and social value.

This compilation of Schechter’s blog posts describes the financial crisis developed during the first decade of the 21st century, the influence of activists such as Martin Luther King and Jesse Jackson on Occupy Wall Street, the ascent of Al Jazeera, the expulsion of Helen Thomas and Keith Olbermann from mainstream media, and increased partisanship and polarization in U.S. politics.

The African Unconscious: Roots of Ancient Mysticism and Modern Psychology, by Dr. Edward Bruce Bynum, with an Introduction by Linda James Myers, $21.99
The African Unconscious, originally published in 1999, is an Afro-centric look at human history based on archaeology, genetics, and the biospiritual roots of religion and science. Author Edward Bruce Bynum offers a captivating and controversial viewpoint on the roots of our human existence, positing that all humans at their deepest core are variations on the African template, creating a shared identity and collective unconscious in all. He looks at both phenotypical types and psychic structures that form and identify us as human beings. Ideal for humanistic and transpersonal psychologists and those interested in African American art and culture, The African Unconscious is a blend of modern and ancient psychology that provides a relevant backdrop to humanity and our daily life.