Darwin Gillett, author of Noble Enterprise: The Commonsense Guide to Uplifting People and Profits, will speak at conference in Brazil on October 2nd. The conference will be hosted by Fundaceo Dom Cabral, named one of the top ten business schools world-wide by Financial Times for the past three years running. Please check Mr. Gillett's press release, quoted below, for more information.

"While critics of Capitalism, such as the Occupy Wall Street movement, rail against business as a bastion of profit-hungry executives, with little regard for the masses let alone the environment, one Maine businessman has been espousing and documenting an approach for doing business that benefits both profits and social values. This approach helps companies succeed and contributes to a fiar and just society and to the environment." 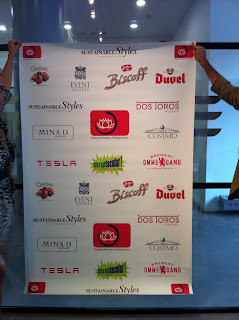 Sustainable Styles, a new magazine venture from sustainable activist Pamela Peeters, held a launch party co-sponsored by Cosimo last Wednesday evening. Among the guests was Frans Verhagen, whose recent book, The Tierra Solution, was being raffled along with Nikola Tesla's autobiography My Inventions. The launch party was held at Tesla's namesake, the Tesla Motors Showroom, where guests were treated to a close-up look at one of the innovative electrical cars, inspired by the works and inventions of Nikola Tesla.

If you're interested in learning more about Sustainable Styles and Pamela Peeters work, please visit their Facebook page or consider a donation to the magazine.

Danny Schechter on the Anniversary of Occupy Wall Street

Yesterday, September 17, was the anniversary of the Occupy Wall Street movement. News outlets, such as Yahoo! News, noted that the turnout was underwhelming and that police nipped things in the bud almost immediately. Read Danny's take on the first anniversary of #OWS and catch his follow up in today's blog post. Of course, you can also check out his play-by-play of the movement during it's heyday in his book, Occupy: Dissecting Occupy Wall Street.
Posted by Cosimo, Inc. No comments:
Email ThisBlogThis!Share to TwitterShare to FacebookShare to Pinterest
Labels: #OWS, Anniversary of Occupy, Danny Schechter, in the news, Occupy, Occupy Wall Street

This Saturday and Sunday, Cosimo author Louis Bohtlingk is presenting his climate-conscious finance book, Dare to Care, at American Book Center locations in The Hague and Amsterdam in The Netherlands. In addition, he will be demonstrating the technology of the Espresso Book Machine.

Not only will this be an interesting presentation on the meaning of money in our economies from someone who has worked in finance and with money for years, but copies of Dare to Care will be printed locally at the event by the Espresso Book Machine for fans who want a signed copy.

Dare to Care is just one of thousands of Cosimo titles available on this innovative publishing machine, which is featured in bookstores around the world. In New York City, McNally Jackson in Soho houses its own machine, ready to print any book within the Espresso database at a moment's notice. This device as a fantastic alternative for bookstores who want to offer print-on-demand books, but don't want to carry a large stock, especially for stores in locations where not every single book is available or where online ordering is not always available or fast. For locations of all Espresso Book Machines around the world, click here.
Posted by Cosimo, Inc. No comments:
Email ThisBlogThis!Share to TwitterShare to FacebookShare to Pinterest
Labels: author event, cosimo books, Dare to Care, espresso book machine, International News, the netherlands

According to The New York Times, fans of inventor and writer Nikola Tesla are hosting fundraisers to create a museum featuring Tesla's inventions and life in his dilapidated laboratory, Wardenclyffe.

One such method of fundraising is producing a movie about Tesla, which would include the purchase of and subsequently feature the estate. Other plans include online fundraising and philanthropy, but all will contribute to the purchase of the museum, which will educate the public on the largely under-publicized man.

Fans or newcomers to Tesla's work can start with his autobiography, My Inventions, available in both paperback and hardcover. Additionally, you can read about his Experiments with Alternate Currents of High Potential and High Frequency, also in paperback and hardcover, and The Problem of Increasing Human Energy, an always-hot topic with the discussions of climate change.
Posted by Cosimo, Inc. 12 comments:
Email ThisBlogThis!Share to TwitterShare to FacebookShare to Pinterest
Labels: Cosimo Classics, Nikola Tesla, The New York Times does it again

Self-publishing is now "validated" by The New York Times

According to a recent article in The New York Times, self-publishing is no longer just about the vanity presses. Of course, we've known this for years, as a sort-of mashup between traditional publishing and typical POD publishers, which are largely self-publishing companies. More than half of the books published last year--somewhere between 150,000 to 200,000 out of 350,000 titles--were self-published.

Much of this success (or rather, publicity) can be attributed to the Amazon self-publishing boom with CreateSpace and Kindle Direct Publishing. The New York Times' attention can also probably be blamed on Fifty Shades of Grey, which as most people know, started out as a self-published, hastily doctored Twilight fanfiction. After mentioning two self-published books which did well ("Fifty Shades of Grey" and "The Fine Print of Self-Publishing," neither of which apparently warrant correct punctuation for book titles), the article gives the disappointing caveat that most self-published books will only ever sell between 50 and 100 copies, a dismal quantity at best.

Many authors who self-publish might not care, having published the book for various reasons. Often authors don't care about getting their book to a wide audience, but just about getting the book out at all. Of course, many (most) might just be overly-optimistic. As one self-published author whose book got bought by a big house put it, "The biggest thing you have against you in trying to sell your book is that people don't know about it."

This is true, and not limited to self-publishing. Other articles have been coming out about how difficult it is to get books noticed by the public, through online and traditional marketing methods. But publishers have contacts in the business, and that's why publishing through other methods can be beneficial. Though we publish books through print-on-demand technology, a much more cost effective method than large print runs, we market our books using both traditional and online methods. This can be a great help to authors who don't know where to start. Of course, the author is always the most effective marketer, especially of non-fiction books, since they ideally have an audience and platform already built up and can reach them most easily. Basically, as the article states, it's nothing revolutionary to get people to notice your work, but it does take a lot of effort.

The point is, The New York Times has finally gotten around to noticing that people are self-publishing. That it can be a good choice for some authors, but that many won't make it. That it's hard work. Welcome to the 21st century.
Posted by Cosimo, Inc. No comments:
Email ThisBlogThis!Share to TwitterShare to FacebookShare to Pinterest
Labels: 21st century, Fifty Shades of Grey, Future, Grammar Nazi, Publishing 101, self-publishing, The New York Times does it again
Newer Posts Older Posts Home
Subscribe to: Posts (Atom)