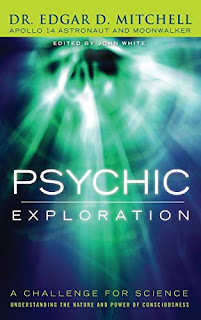 In honor of the 50th anniversary of the moon landing this summer, we are celebrating Dr. Edgar D. Mitchell and his book, Psychic Exploration, A Challenge for Science as our July Book of the Month!

This landmark anthology of nearly thirty chapters on every area of psychic research is finally available again. Edgar D. Mitchell, Apollo 14 astronaut and moonwalker, as well as a distinguished researcher of the study of human consciousness, brought together eminent scientists to write about issues once considered too controversial to discuss. This book includes fascinating chapters on the history of parapsychology, telepathy, hauntings, psychic phenomena, and consciousness, along with an extensive glossary and index. This timeless anthology continues to be appealing as a reference work for those curious about the history of parapsychology, fans of the world of psi, and readers interested in the meaning of the universe.

About the Author
Edgar D. Mitchell was the founder of IONS, The Institute of Noetic Sciences, as well as a former Apollo astronaut, and a Navy Captain. Among his many degrees are four honorary doctorates and a ScD in Aeronautics and Astronautics from MIT. In July we remember Apollo 11, and all Apollo missions, as America celebrates the 50th anniversary of, “One giant leap for mankind.”