February Classic of the Month: The Report on Unidentified Flying Objects by Edward Ruppelt 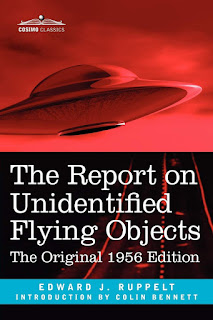 Cosimo is excited to present our February Classic of the Month, The Report on Unidentified Flying Objects: The Original 1956 Edition by Edward J. Ruppelt with an introduction by UFO expert and investigative writer Colin Bennett.

About the Author
Edward J. Ruppelt (1923-1960) served at the Air Technical Intelligence Center, where he took over Project Grudge, a formal investigation by the U.S. military with the goal of debunking extraterrestrial and UFO activity. Under Ruppelt's supervision, the project, later named Blue Book, experienced its most fruitful years, when investigations were properly conducted without judgment or disdain.
About Colin Bennett
Colin Bennett was an internationally-recognized expert on ufology and extraterrestrial activity, and is the author of Politics of the Imagination, Looking for Orthon, and Flying Saucers over the White House.  For more information, visit his new website