Classic of the Month: The Life and Adventures of Santa Claus 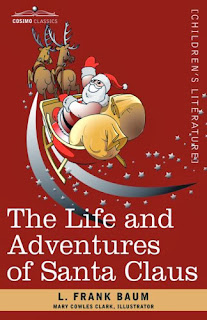 "The sweet generousness of his work caused a few selfish folk to sneer, but even these were forced to admit their respect for a man so gentle-natured that he loved to devote his life to pleasing the helpless little ones of his race."


Our Classic of the Month is The Life and Adventures of Santa Claus, a wonderful 'history' of Santa Claus from L. Frank Baum, the author who brought us the beloved tale The Wonderful Wizard of Oz.

The Life and Adventures of Santa Claus provides an unusual and fanciful origin story for Santa, suggesting that Neclaus was abandoned as a baby and adopted by the fairy queen Necile (Neclaus meaning "Necile's Little One"). Baum's Santa is a mortal living among fairies and other fantastical creatures.

As an adult he returns to the human world to discover it is full of dark things like poverty and war; as a result of what he has witnessed, Neclaus makes it his mission to gladden the hearts of the world's children. He settles in the Laughing Valley of Hohaho and brings toys to all children (both good and bad) because


"He knew that the best of children were sometimes naughty, and that the naughty ones were often good. It is the way with children, the world over, and he would not have changed their natures had he possessed the power to do so."


This wonderfully unique version of the Claus story weaves traditional tales of Santa Claus with epic battles against evil creatures. Readers learn the origins of Santa's first toy, how he found his reindeer, and why the first stockings were hung by the fireplace. Interwoven with these charming stories are lessons to learn about kindness, humanity, and charity.

Originally published in 1902, The Life and Adventures of Santa Claus continues to charm and inspire children every year. It has been reproduced for television and film, and was even turned into a graphic novel by well-known artist Mike Ploog.