At Cosimo we believe wholeheartedly in the idea that books can inspire, inform, and change people for the better. This belief encourages us to publish new works that challenge the way we think about business practice, personal well-being, and public affairs. It's also why we publish reproductions of ground-breaking Classics like Twelve Years a Slave. We believe that all books--whether they be renowned Classics or fledgling new releases--can absolutely change someone's life. 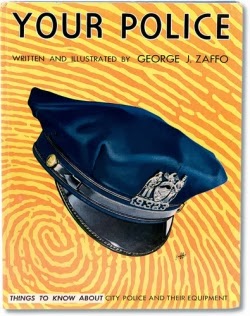 That's why we loved hearing about Bill Bratton, the new NYPD police commissioner, who recently suggested that a book inspired him to become a police officer. When Bratton's position was announced, the newly-announced commissioner clutched a copy of Your Police, the children's book by George Zaffo. Bratton says this children's book--about understanding the police and how they operate in a big city--inspired a life-long love of the NYPD and policing.

Bratton's appreciation has inspired renewed interest in this forgotten treasure. Though sadly George Zaffo has passed on, Zaffo's son Thomas says the family is enjoying the attention that Bratton has brought to his father's work, suggesting all this press "would have been one kick for him."

Here's hoping that Your Police finds its way back to bookshelves soon, possibly even as a Cosimo Classic. A title that can inspire a man to rise to the rank of police commissioner is certainly a title that inspires and informs.
Posted by Cosimo, Inc.
Email ThisBlogThis!Share to TwitterShare to FacebookShare to Pinterest
Labels: Bill Bratton, classics, George Zaffo, NYPD, Your Police