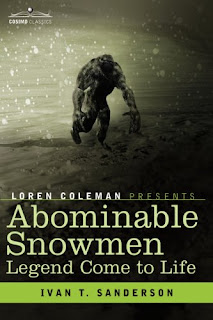 Cosimo is proud to present Abominable Snowmen - Legend Come to Life by Ivan T. Sanderson as our pick for October Classic of the Month!

Scottish zoologist Ivan Terrance Sanderson coined the word cryptozoology and first used it in print in this unique 1961 work, the story of "hairy hominids" across the planet from the very beginnings of human civilization until the mid 20th century.

With its scientific, anthropological approach, this is one of the first books to treat the phenomenon of "Bigfoot" seriously, and introduced a groundbreaking classification system for the spectrum of sub-humanoids.

"I am happy that a whole new generation of cryptozoologists-in-training will be able to read Ivan T. Sanderson's classic book," says cryptozoologist Loren Coleman in his introduction. "This book opened the minds of many to the vastness of the hominoid reports. and spotlighted for people that Bigfoot/Sasquatch research was the next area for exploration in North America."

This edition, complete with the original illustrations and maps, is part of Cosimo's Loren Coleman Presents series. Cosimo is happy to offer this book in both the hardcover and paperback editions.