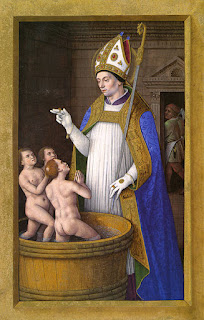 The history of Saint Nicholas is a colorful and storied one: he lived from 270 to December 6, 343 AD, was the Greek Bishop of Myra - located in modern day Turkey - and he was a Christian saint known for his miracles and secret gift-giving. Saint Nicholas attended the First Council of Nicaea, which was the first effort to attain consensus in the Church through an assembly representing all of Christendom. Later on Saint Nicholas became an important figure for Italians and Greeks, honored in the Catholic and Eastern Orthodox Church. Throughout Europe he is celebrated for his generosity, especially towards children. Next Sunday evening, December 5, the Dutch will celebrate their feast of Sint Nicolaas, with poems, marzipan, ginger biscuits and hot chocolate, and with presents for the children.

Saint Nicholas is Dutch folklore, that is also is connected to the American Santa Clause. When the Dutch established the colony of New Amsterdam (current New York),  they celebrated the traditions of Saint Nicholas, and over time shortened "Sinterklaas" to "Santa Claus".  In the early 1800s, American books were published that symbolized the advent of Santa Claus in American tradition, for example: A New-year's present, to the little ones from five to twelve and 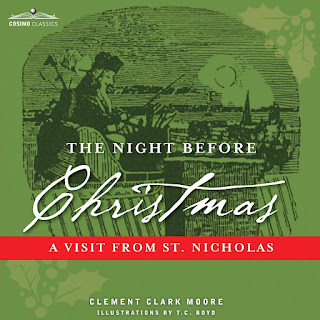 A Visit from St. Nicholas by Clement Clark Moore.

It is with this fascinating history in mind, from the early Christian days to European and Dutch folklore, to Santa Claus in North America, that Cosimo is proud to present to our Dutch readers a beautiful color replica of the Dutch edition of Sint-Nicolaas en zijn knecht by Jan Schenkman. A wonderful gift for children, booklovers and those interested in folklore, and a reminder of the confluence of history and folklore. Enjoy the Holidays and  a "Prettig Sinterklaasfeest"!

This book is available from online bookstores such as Barnes and Noble, DeVriesvanStockum, and as eBook.