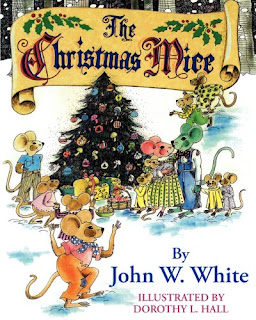 "Isn't that strange? It took some babies to teach grown-ups to be nice to each other. Do you suppose that has anything to do with Christmas?" - The Christmas Mice


Our festive Book of the Month for December is The Christmas Mice by John White and illustrated by Dorothy L. Hall.

The Christmas Mice, a tale for children, is a heartwarming story of love and acceptance. It tells of two mice, Roger and Emily, who are outcasts from their community because they are different. One is green, the other is red-the colors of Christmas.

Encouraged by the birth of his children and the beauty of a Christmas tree, Roger teaches the rest of the meadowmice an important lesson about love and brotherhood. As the two main characters gain acceptance and understanding from the other mice, the importance of peace and oneness of all life is sensitively communicated. Especially relevant this year due to the tumultous times, this book would make the perfect bedtime story or gift.

The Christmas Mice is a touching tale with a powerful message that will delight young readers of all ages. The book is available in paperback at Amazon, and in paperback at Barnes & Noble. It is also available for your Kindle.


About the Author
John White is an internationally-known author in the fields of consciousness research and higher human development. His writing has appeared in magazines and newspapers around the world, including The New York Times, Wall Street Journal, Reader's Digest, Omni, Esquire and Woman's Day, and his books have been translated into ten languages. He holds a bachelor's degree from Dartmouth College and a master of arts degree in teaching from Yale University. He has served on the governing and consulting boards of various academic and research organizations. He has also lectured at various colleges and universities throughout the U.S. and Canada, and has made numerous radio and television appearances.

About the Illustrator
Dorothy L. Hall is an illustrator, art teacher, and cartoonist. She worked as a visual journalist for 20 years and taught Newspaper Design and Magazine Editing and Production at Southern Conn. State University. During the 70’s she was a muralist for the Peabody Museum in New Haven, Connecticut, and has had seven one-woman shows of her paintings.