Series of the Month: Abraham Lincoln: A History 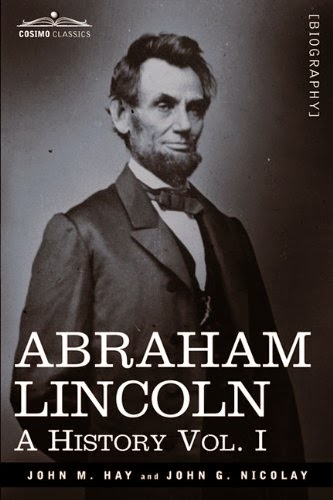 Abraham Lincoln remains a source of fascination and inspiration for writers and filmmakers even 148 years after his death. Just last year saw the release and critical acclaim for the film "Lincoln", directed by Steven Spielberg, which detailed Lincoln's efforts to ratify the Thirteenth Amendment. Then of course, on the lighter side, came the film adaptation of the eponymous novel Abraham Lincoln: Vampire Hunter, written by Seth Grahame-Smith and directed by Timur Bekmambetov. This unusual film asked viewers to imagine a Lincoln who lived a secret second life as an ax-wielding hunter of vampires.

Of course, works like Abraham Lincoln: Vampire Hunter aren't based in fact, but a sense of enjoyment that comes from watching a well-known (and rather serious) historical figure do something completely ridiculous and otherworldly. (It's certainly fun to watch Lincoln don his ever-present top hat and slice into a vampire).

Re-imaginings aside, it's only natural that Lincoln remains a constant in American pop culture production, as he continues to be one of the most significant and fascinating figures in American history. His impact on American history solidified his impact in its cultural creation, so it's only fitting that his story remains rife for the telling and of interest to viewers and readers.

There are plenty of ways for those interested in Lincoln to indulge in their fascination, but one literary work remains a significant and necessary read for the most ardent Lincoln fan: the 1890 work Abraham Lincoln: A History. This ten-volume work was written by two of Lincoln's private secretaries: John Milton Hay and John George Nicolay. This comprehensive work originally appeared in fragments in The Century Magazine over a period of 4 years, upon which it was issued in the first edition now available in replica form, complete with original illustrations. As the work of two people who worked intimately with the President, A History provides an exceptionally detailed account of Lincoln's life, from his genealogical lineage, to his boyhood, early legislative work, opposition to slavery, and so on through his assassination. It remains one of the most thorough examinations of Lincoln's life and administration.

Abraham Lincoln: A History is available in beautiful hardcover or portable paperback, as a 10-volume set or by individual volume. [Full sets are available at a discount by contacting us directly.]
Posted by Cosimo, Inc.
Email ThisBlogThis!Share to TwitterShare to FacebookShare to Pinterest
Labels: Abraham Lincoln, John George Nicolay, John M. Hay, Lincoln, Series of the Month, U.S. history